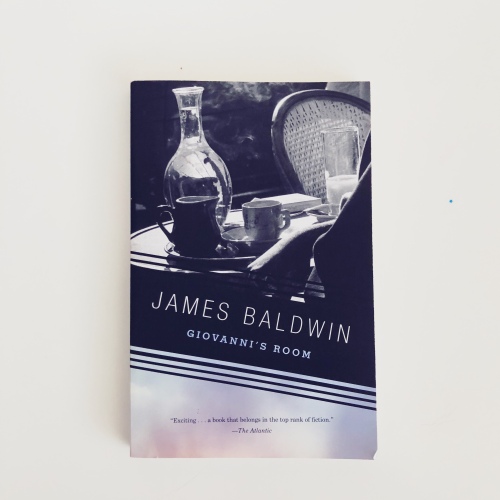 “Somebody…should have told us that not many people have ever died of love. But multitudes have perished – and are perishing every hour.”

This book blew me away. A precursor to Call Me By Your Name (which is no secret that I absolutely love), I can see where Aciman was influenced. Baldwin is such a beautiful craftsman of words; his writing is so simple, yet so affecting. This would have a been a bold and brave book during during the time it was published, 1956, and it’s just one way in which Baldwin continues to astound me.

While living in Paris, David, an American, meets a bartender named Giovanni. A spark is there, and through forceful encouragement, he invites Giovanni out with the group. The two connect, and before long they are living together, nearly penniless, in Giovanni’s tiny 1 room apartment. David struggles with his identity – is he bisexual? Gay? It all seems irrelevant when he is with Giovanni. However, David has a fiancé, Hella, and has to make a difficult decision about the life he wants to have.

While living in Giovanni’s small apartment, David refers to it as a closet he is trapped inside of, and I can’t really put it any better than that. This is a story about feeling trapped, choosing to eschew love out of fear, and the painful regret that comes later. David and Giovanni’s lives go down very different paths, and they must each account for the decisions they make and the regrets they have in the face of death. This book is stunningly beautiful at times, violent and tragic at others; it was an emotional journey that had me in tears more than once.

There is so much packed into this slim book by David Chariandy. Brother explores topics that many would describe as timely, but that he describes as being felt by many for far too long. Chariandy dives into race, masculinity, police violence, community, the immigrant experience, and the power of music with striking precision and depth.

Michael and his older brother, Francis, live in a community called The Park in Scarborough, Ontario. Raised by their hard working Trinidadian mother, the boys are often left alone to take care of each other. Francis takes on the role of leader, guiding and teaching Michael along the way, often making mistakes of his own. With love and respect for their mother the boys stay on a clean path, but after witnessing an instance of violence, Francis is changed.

The story jumps back and forth in time from when the boys are kids to present day. As Michael and Francis struggle to find purpose and identity, the pair are subject to the prejudice that comes from having brown skin and living in an immigrant community; expectations are low. Through a love of hip hop, Francis begins to explore new opportunities, unknowingly sealing his fate. In the aftermath of tragedy, Michael discovers the healing power of his community.

Chariandy did a great job at representing for us children of Caribbean immigrants (my mother is Jamaican), layering in even more for me to love about this book. I don’t think I’ve ever seen “ackee” mentioned in a book, or that “pears” are “avocados”, at least to Caribbean folks. Knowing that so many Canadians will read this story through Canada Reads 2018 brings me so much happiness. 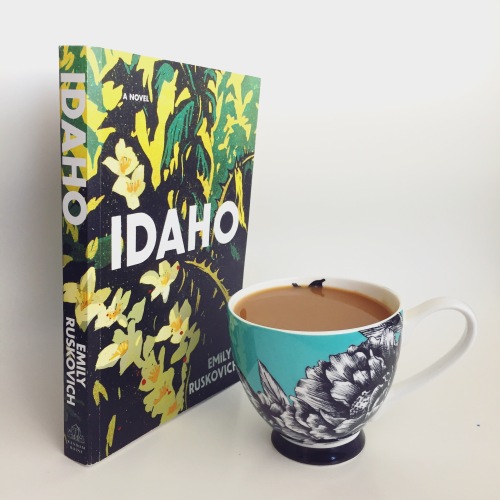 From the publisher:
One hot August day a family drives to a mountain clearing to collect birch wood. Jenny, the mother, is in charge of lopping any small limbs off the logs with a hatchet. Wade, the father, does the stacking. The two daughters, June and May, aged nine and six, drink lemonade, swat away horseflies, bicker, and sing snatches of songs as they while away the time.

But then something unimaginably shocking happens, an act so extreme it will scatter the family in every different direction.

In a story told from multiple perspectives and in razor-sharp prose, we gradually learn more about this act, and the way its violence, love and memory reverberate through the life of every character in Idaho.

My thoughts:
Perhaps it’s what both their hearts have been wanting all along – to be broken. In order to know that they were whole enough to break.

I can’t remember the last time I was so moved by the writing in a book. I read beautifully written books all of the time, but Ruskovich’s prose is absolutely stunning. It’s simple and lyrical, yet carries so much weight. Simple revelations or descriptions would nearly move me to tears. I read this book slowly, because it’s the only way to read a book like this. I savored the prose, and was completely enthralled with the characters. Ruskovich tells the story of a deeply broken family and the power of memory.

Anne is a music teacher who married a man named Wade. Wade is loosing his memory to dementia, and came to her intent on taking piano lessons after hearing that it can help with memory. He was married previously and had two daughters, May and June. On one tragic day, he loses it all. Years later, he is haunted by the parts of his memory that he can recall, as well as the parts that he is loosing. Anne meets Wade during the early stages of his memory loss, and desperately wants to care for him and find her way into his heart. The story is told from multiple perspectives and timelines, making for a well rounded picture of the family. We hear from Anne, the girls, Wade’s ex-wife Jenny, and more.

This book is painfully sad, but has so many moments of joy and beauty within. I adored the scenes with May and June as little girls, swimming in water barrels and playing the game MASH. Ruskovich so perfectly captured the innocence of childhood, and I loved getting to know them. Wade’s memory loss really resonated with me, as I watched my Grandmother suffer with Alzheimer’s, and eventually completely forget who I was. It’s absolutely shocking and heartbreaking to experience.

Here’s the thing – this book will not be for everyone. It’s completely character driven, and I think some readers will find this dissatisfying. There is a plot here, but the plot is the force behind the characters motivations and choices, not what keeps the story moving forward. For me, this book was nearly perfect. Ruskovich crafted something truly unique with Idaho, and I will be anxiously awaiting her next creation.

From the publisher:
Anna was a good wife, mostly.

Anna Benz, an American in her late thirties, lives with her Swiss husband, Bruno—a banker—and their three young children in a postcard-perfect suburb of Zürich. Though she leads a comfortable, well-appointed life, Anna is falling apart inside. Adrift and increasingly unable to connect with the emotionally unavailable Bruno or even with her own thoughts and feelings, Anna tries to rouse herself with new experiences: German language classes, Jungian analysis, and a series of sexual affairs she enters with an ease that surprises even her.

But Anna can’t easily extract herself from these affairs. When she wants to end them, she finds it’s difficult. Tensions escalate, and her lies start to spin out of control. Having crossed a moral threshold, Anna will discover where a woman goes when there is no going back.

My thoughts:
The problem wasn’t that her bucket was empty, the problem was that it was full. So full it overbrimmed. So full and so heavy. Anna wasn’t strong enough to carry it.

Hausfrau really blew me away. I went into it knowing the basics: a modern day Anna Karenina or Madam Bovary about a woman who is dissatisfied in her marriage and has affairs to pass the boredom. I thought it would be a quick read without much depth. I couldn’t have been more wrong.

Oh the surface, Jill Alexander Essbaum’s debut novel comes off as a typical story about a stay at home mom. Anna Benz has a beautiful life – a husband who provides for her and her 3 children, a nice home, nice clothes, and anything else she needs. Anna, however, is unhappy. She goes to therapy and undergoes much Jungian analysis to get to the root of her apathy, and her therapist often tells her “a bored woman is a dangerous woman”. While I disliked this phrasing, it proved true for Anna.

Anna has many, explicitly detailed, affairs throughout the story. We quickly learn that this is her drug of choice and coping mechanism, and it become clear she has lost control. In a heartbreaking affair scene, Anna internally cries out for her husband, whose attention she wants more than anything. All of this leads to startling revelations and a truly tragic turn of events.

Pain is the proof of life. That’s it’s purpose.

This book will not satisfy everyone’s taste, and I can see many readers being infuriated with Anna’s carelessness. I certainly felt this way for the first third of the book. However, there is a shift, and as I started to realize how far gone Anna was, I was able to find a place of empathy. Anna makes terrible decisions that result in terrible consequences, and I feel incredibly uneasy with how certain elements came to a close. However, this book ignited many strong opinions and gave me a lot to think about, and that is always a win for me.

Thanks for stopping by! This is a place where you'll find my book reviews and random thoughts. Take a look around and feel free to drop me a line!