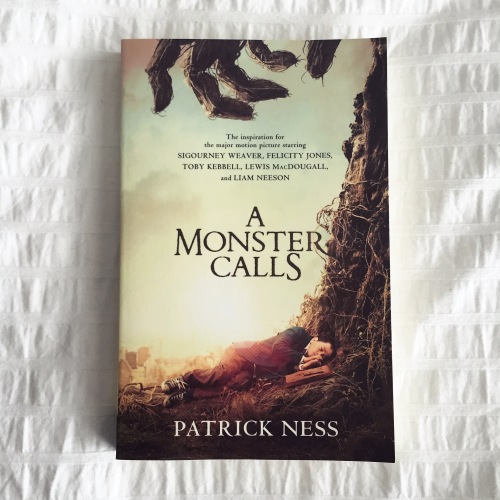 From the publisher:
At seven minutes past midnight, thirteen-year-old Conor wakes to find a monster outside his bedroom window. But it isn’t the monster Conor’s been expecting– he’s been expecting the one from his nightmare, the nightmare he’s had nearly every night since his mother started her treatments. The monster in his backyard is different. It’s ancient. And wild. And it wants something from Conor. Something terrible and dangerous. It wants the truth.

My thoughts:
“Stories are wild creatures…When you let them loose, who knows what havoc they might wreak?”

This little book had me crying my eyes out; I absolutely loved it. I’ll do my best to sum this up without any spoilers. Conor’s life is spiraling downhill: his father has moved away and started another family, his mother is ill, and he has nowhere to turn for relief from his misery. One night, a monster visits. Over time, the monster tells Conor three tales that blur the lines between right and wrong, and good and evil. The fourth tale will be Conor’s, and what a tale it is.

A brilliant idea from Siobhan Dowd turned into a beautiful work by Patrick Ness.

Thanks for stopping by! This is a place where you'll find my book reviews and random thoughts. Take a look around and feel free to drop me a line!